Home / Ozone Applications / Wastewater
Wastewater
Environmentalists and water treatment experts are predicting that the recycling of wastewater will be a norm in the coming years. This makes one wonder that how the recycling can be done on the wastewater, which at present cannot be treated to the satisfaction of pollution control board. We spent crores of rupees every year to treat the effluent and we throw away the entire treated water. The problem with the wastewater are typically in the areas of COD, BOD, DOC, color removal and toxic chemicals removal from the wastewater and the systems we have that take care of these problems are huge. They take up a lot of your valuable land and other scarce resources. They require regular maintenance and consume a lot of chemicals daily. The chemicals add to newer problems. Ultimately there is no guarantee that your system is a full proof system.
The problems are overwhelmingly high in numbers but the solution is one. Like many other applications in the field water treatment, wastewater can also be treated with ozone very effectively. Ozone is a highly reactive form of oxygen, capable of converting organic molecules to water and carbon dioxide. This is called mineralization. Ozone will also react with heavy metals such as iron, and manganese to form precipitates which are easily filterable. Moreover, under certain operating conditions ozone can be converted to hydroxyl radicals which are even more powerful oxidizers than ozone itself. Processes in which ozone is converted to hydroxyl radicals to achieve higher reaction rates are known as Advanced Oxidation Processes 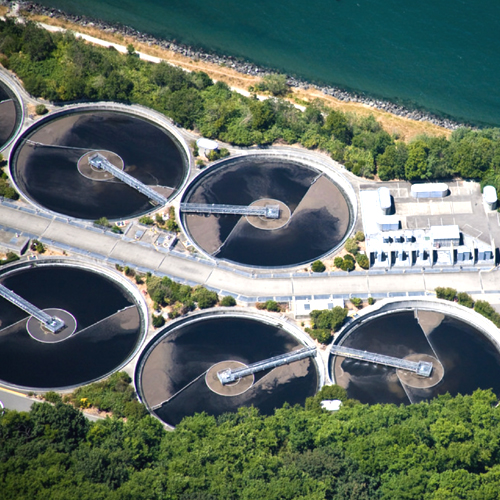 The Main Advantages Of Using Ozonisation For Wastewater Treatment
Disinfection
Presently for disinfection chlorine or chlorine compounds are used, but because of the potential DBP (Disinfection Byproducts) ozonation is rapidly replacing the chlorination systems. In many places where ozone is used primarily as disinfectant, indirect improvements in odor or suspended solids removal were achieved. Further easily bio-degradable compounds are produced from the remaining DOC (Dissolved Organic Compounds) in the effluent.

Oxidation Of Inorganic Compunds
Ozone reacts very aggressively with cyanide (CN). Cyanide is frequently used in galvanic processes in the metal processing and electronic industries. Nitrite (NO2) as well as sulfide (H2S/S2) removal from the effluent is easier using ozone as both substances react aggressively with ozone. Nitrite is a toxic compound. Fe2+ and Mn2+ compounds are rapidly converted into filterable Fe (OH)3 and MnO (OH)2 due to ozone. The application is in the beverage industry. Arsenic removal system also utilizes ozone for pre-oxidation, as As-III is converted to As-V. Oxidation of organic compounds: Full scale ozonation systems have been used to treat effluent such as landfill leachates as well as effluent from the textiles, pharmaceutical and chemical industries. The main pollutants associated with these waters are refractory organics, which can be characterized as :
Due to the complex nature of COD the ozonation stage is mostly operated between two biological systems. An important advantage of this process combination is that no secondary wastes are produced, as would be the case of the ozone-bio process steps were substituted by an activated carbon treatment.

Color Removal
Water appears colored when visible radiation is absorbed by dissolved materials or when light is reflected by suspended solids. Colored water is basically found at dye houses, textile concerns, food and beverage processors, slaughter houses and other industrial plants. Many industries have already started using ozone, which is a more powerful and a safer substitute than chlorine for color removal. The best results are achieved when water has been treated to lower BOD, COD and suspended solids (SS) values so that the ozone reaction is primarily for color removal. Wastewater is Ozonated after it exists from chemical or/and biological pretreatment at a dosage from 50 mg/lit to 150 mg/lit. At these levels, color can be reduced by 90 to 98%. The dosage simultaneously reduces chemical oxygen demand (COD) by about 45%. (Small increases of BOD, 5 to 9%, may occur.)

Color removal efficiency depends on the ozone dosage, the feed's color values, the wastewater type and temperature and water characteristics. Temperature less than 30oC produce the optimum conditions for ozone solubility. Ozone installations for this application represent a significant capital cost, but offer lower operating expense than conventional treatment using chemical coagulants. In addition to the cost of chemical, the coagulant process generates sludge that requires disposal and further expenditure. Generally, the investment for an ozone installation can be paid back in 3 to 5 years, depending upon the size and other specifications.

Improved Coagulation & Turbidity Removal
Oxidation of dissolved organic materials by Ozone results in polar and charged molecules that can react with Polyvalent Aluminum or Calcium to form precipitates. Treatment of a surface water with up to 0.5 ppm of Ozone results in a decrease in turbidity, improved settleability and a reduction in the number of particles. Referred to as pre-ozonation this treatment destabilizes the colloid with a resultant reduction of the amount of coagulant needed to produce a clear filtrate. Ozone is effective against a large variety of water treatment problems. In general, the more problems in the water to be treated with ozone, the less an ozonation system costs when compared to other more conventional treatment methods.
Some Specific Compunds Oxidized By Ozone
Application Of Ozone In Wastewater