Home / Ozone Applications / Air Disinfection
Air Disinfection
Like the water we drink and the food we eat, the air we breathe has a great impact on our health. There are some contaminates in the air such as bacteria, virus, germs, airborne pathogens and disagreeable odor, such as formaldehyde, smoke, paint, cooking smell. These can cause various diseases such as asthma, irritative odor and respiratory problems. The best and effective solution is to use ozone for Air Disinfection. Since Ozone is a powerful oxidizer it eliminates any kind of bacteria, virus, germs, airborne pathogens and other contaminants present in the air.
Brief description of Ozone Application areas and recommendations for Air Disinfection using Ozone:
Air Conditioning
The collection of particulate organic material and condensation of moisture that occurs around the drip pans, condensation coils and duct work of air conditioning units creates the perfect environment for the growth of bio films. Not only do these lead to high levels of fungi and bacteria that become airborne and get transported around the building via air recirculation, but they also reduce the efficiency and heat transfer of the systems. Airborne bacteria and fungi do not only present a major health hazard but also bad smell. By treating the air conditioning system with ozone, you can prevent the build-up of bio films, and consequently the build-up of bacteria and fungi. This will eliminate bad smell and the spread of health problems such as allergies, rashes, colds, viruses and legionnaires disease. 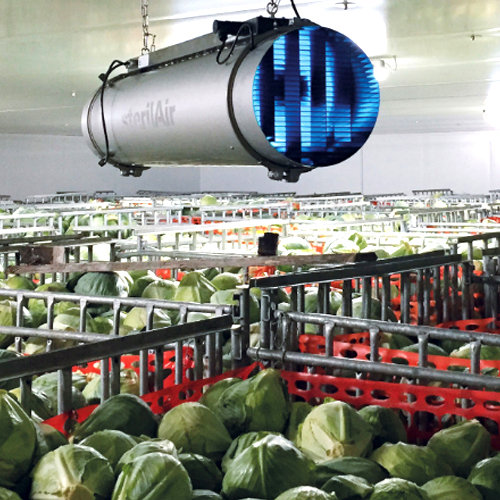 Food Storage
Due to ozone's potency as an oxidant, use in food storage is a perfect application area. It can be utilized as a gaseous fumigant within a number of phases of food storage, including storage rooms, coolers, silos, and transport vehicles, fulfilling a number of functions in each stage.

Two of the main areas in which ozone can be most fruitfully utilized are within the pre-packing stage of production for products such as meat and poultry, and the storage of directly harvested products, such as potatoes. Ozone treatment of products prior to packing dramatically reduces bacteria levels, as well as controlling Listeria and other pathogens, helping to extend the shelf life of the products. As well as the products being treated, the equipment that is used in the production process can be treated at the same time, thus increasing the efficiency of the process. Ozone treatment is also safe for ready-to-eat products as well as those that require further preparation. With the storage of harvested products, such as potatoes, ozone treatment implies that the problem of products rotting is greatly reduced due to ozone's ability to eliminate the harmful bacteria, such as Erwinia in the case of potatoes that cause the rot.
Hotel Rooms
Polluted indoor air is a serious environmental health concern as well as an unpleasant experience for those subjected to it, not least when you are paying for the privilege to breathe it. Hotel rooms, if not properly cleaned and ventilated thoroughly, can hold a number of objectionable odors. Ozone can eradicate this problem. A specific problem is when guests have been smoking in a non-smoking room. . Ozone's high level oxidation properties means that with just a short time of exposure, all the bad odors will not just be masked, but actually eliminated. The room is left with a fresh air and is ready for the new customer to use it. Ozone treatment also brings down the maintenance of carpets, drapes and other textiles utilized in the room.
Industrial Kitchens
Industrial kitchens often have a problem with their ventilation systems, majority of the air that passes through the ventilation system is heavy with grease, and can cause substantial problems for normal filtration systems, that become clogged and ineffective quickly. Filters are also quite ineffective against odor. By treating the off-gas with ozone, both of these areas can be addressed. Ozone reacts with the grease in the air thereby reducing the amount of grease and at the same time eliminates odor. The reduced level of grease in the off gas means that ducts and channels need less cleaning and maintenance thereby lowering operational costs.
Mold And Mildew Removal
Mould is one of the top causes of allergic symptoms and can be found everywhere. Mould infects carpeting, insulation, walls, even the wood and brick framing inside your home. When they grow uncontrolled, moulds can gradually destroy the surfaces they are on by rendering them unusable, which makes removal of the surface the only alternative. The only traditional way to actually get rid of the mould is to remove all visible mould, disinfect the surfaces, and reduce the level of moisture.

Using ozone is a well proven way of hindering mould growth. Ozone's strong oxidation potential means that it actively kills airborne mould spores. It is also 3000 times faster as a bactericide than chlorine, as well as being safe for the environment. It is well documented that ozone offers a fast, thorough and environmentally friendly solution to mould and mildew problems.
Odor Removal
Ozone can help with many kinds of odors in different kind of situations. It oxidizes and breaks down molecules that carry the odor in the first place, thus eradicating it. One example is the use of ozone as odor control within industry. Odor control is rapidly becoming one of the most discussed topics within industrial environmental concerns. The reason for this increase in awareness lies in the expansion of urban populations into industrial areas. This has forced businesses to look into the problem of odor pollution emanating from their premises. Ozone can be used to treat the off-gas and thus eliminate the odor. It can also be utilized within industrial production facilities, in barns and breeding facilities. Ozone's high oxidization properties mean that it can effectively control many odors but it is important that every application is carefully analyzed and engineered. Every odor is in its own way unique and the ozonation system needs to tailored to get a fully satisfactory result.
Restaurants / Bars / Casinos
Use of ozone in restaurants, bars and casinos helps to maintain a pleasant atmosphere for customers by keeping the air clean and controlling the inevitable odors that occur in such places. Low concentrations of ozone can effectively oxidize micro-organisms that exist in the air causing bad odor, and also kill bacteria and viruses.
Smoke Removal
With the continued awareness of the dangers of passive smoking, specially designated smoking rooms are becoming more and more common. Due to constant exposure to smoke in these rooms however, it can become a revolting experience entering such rooms, even for those who smoke. Ozone treatment can leave the room odor and smoke free as the gas reacts with the smoke molecules, effectively separating them and allowing them to dissipate. Ozone is effective against any smoke from natural substances, and can be used not just in smoking rooms, but also in sanitation of smoke damage from fires.