Home / Ozone Applications / Ozone in Cooling Towers
Ozone in Cooling Towers
Ozone is widely used in Cooling Towers to improve cooling water quality. As an alternative to conventional biocide chemicals, ozone represents a more effective and environmentally friendly solution.
Cooling systems provide ideal growth environments for bacteria, algae, fungi and mollusks which can adhere to pipeline, heat exchanger and cooling tower surfaces. The result can be reduced heat transfer efficiency, increased corrosion and potential system failure. Biological growth, scaling and corrosion are the main maintenance concerns with cooling towers. Typical treatment involves the application of chemicals such as chlorine, sulfuric acid, phosphorus and zinc compounds. Care must be taken in the storage, use or discharge of these chemicals. Care must also be taken to ensure that the proper mixes and proportion of chemicals are used and to determine the corresponding blow down rates. Excessive application of these treatment compounds raises the probability of corrosion and other undesirable effects. As traditional chemical water treatments are being restricted because of environmental concerns, Ozone is gaining acceptance as a viable biocide alternatives.

Ozone produces oxidation by-products and these several secondary compounds must be accounted for in the set up of cooling tower system Ozonation. Both iron and manganese will be oxidized by the ozone to form insoluble particulate matter, which will collect in basins on screens or in any scale that is formed. Excessive amounts of either of these two elements in the make-up water will require pretreatment, such as softening, to facilitate removal. Organic compounds that may either be in the make-up water or introduced through the atmosphere will react with ozone to form various substances. These substances, particularly peroxides, aldehydes, ketones and alcohols are efficient biocides themselves, which will further disinfect the water. If bromide is present, ozone can convert it to hypobromous acid and hypobromite ion. These two are also effective biocides and would be considered helpful in controlling biological fouling, but because they are such effective biocides, they are generally detrimental in the blowdown discharge to municipal waste water treatment systems. Excessive ozone concentrations in the water will further oxidize the hypobromite ion to bromated, reducing the biocidal effectiveness of this component. 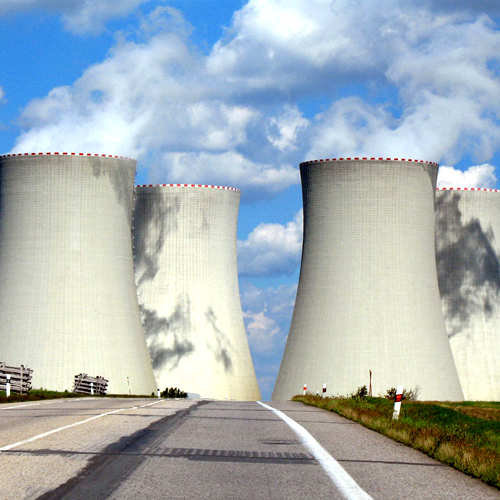 Effect of Ozone on Biofilms
On heat exchanger surfaces, biofilms degrade heat transfer efficiency, increase pressure drop (and pumping power required) through exchanger tubes and plates by substantially reducing flow rates through these machines and can lead to corrosion problems under the film. Ozone kills organisms by rupturing their cell walls, a process to which the microorganisms cannot develop immunity. When oxidized, the mucilaginous material secreted by these microorganisms is loosened from the heat exchanger surfaces, and the biofilms, along with inorganic precipitates which were adhered to the secretions, are flushed away by the motion of the flowing water. Once biofilms have been removed, ozone concentrations of less than 0.1 mg/lit have proven to be effective in preventing new growth of bio-fouling material.
Effect of Ozone on Algae
Most algal species are readily oxidized upon application of ozone; different species will require different exposure times for removal. The oxidation pocess can proceed to total decomposition of the algae to carbon-dioxide and water with sufficient concentrations of ozone and contact time. A combination of controlled sunlight exposure and low level of residual ozone will minimize algae growth in the cooling tower fill and basin. Destruction of many algal species using ozonation will liberate nucleic acids, proteins, polysaccarides, and other bio-polymers. The production of polysaccarides by exposure of biofilms and algae to ozone liberatessurface active materials with ability to complex iron, manganese and calcim effectively removing them from solution in the tower water and thereby reducing scaling potencial. These surface active substances, through micro-flocculation, may contribute to the observation that ozone treated cooling tower water becomes crystal clear.Ozone treatment is a unique and valuable process. It can accomplish all the aforementioned treatment objectives without leaving a taste or chemical residue behind. Ozone is an exceptionally powerful disinfectant and oxidant. It does its job and disappears. With appropriate pretreatment and careful monitoring and control, it can leave water free of disinfection by- products as well.
Effect of Ozone on Bacteria
High Levels of bacteria can lead to an increase in microbially influenced corrosion (MIC). Certain sulfate reducing and iron metabolizing bacteria influenced can destroy a system's steel or iron piping in less than one year. Ozone kills bacteria by rapturing their cell walls, aprocess to which microorganisms cannot develop immunity. Residual ozone concentrations of 0.4 mg/lit or higher result in 100% kill within 2 to 3 minutes for pseudomonas fluorescens (a biofim producer) in an established biofilm, while residual concentrations as low as 0.1 mg/lit will remove 70 to 80% of the biofilm in a 3 to 4 hour exposure. Studies have also proven that maintained ozone concentrations of less than 0.0 mg/lit will reduce the population of Legionella pneumophila, the bacteria responsible for Legionnaire's Disease, in cooling tower system water by 80%.
Effect of Ozone on Scaling
Another common trouble in a cooling tower system which requires prevention is mineral build-up, commonly referred to as scaling. Minerals such as calcium and magnesium, which are normal dissolved solids in makeup water, are deposited by two different mechanisms, thermal and biological. As the water in a tower evaporates, dissolved solids become concentrated in the circulating water. When the concentration of these reaches the solubility limit of water, they begin to precipitate out of solution. When biofilms are present on the walls and other components of the tower, the biofilms acts as a binder, cementing the mineral micro-crystals to the deposition of organic and inorganic matter increases scale thickness versus heat transfer efficiency degradation are well documented. Ozone will oxidize the biological matter and by removing the glue, the mineral scale is allowed to fall away from the affected surfaces.

However, if the scaling is not due to the presence of biofilms, ozone will probably be ineffective in removing the scale; Biofilm is rarely the dominant fraction of scale formation where the temperature of the heat exchanger is in excess of 135 degrees Fahrenheit. Scale formation minerals are less soluble at these higher temperatures and will deposit from solution directly onto hot heat exchange surfaces.
Effect of Ozone on Corrosion
There have been several studies on corrosion rates in Ozonated systems conducted and reported in trade journals and other literature. The initial premise for cooling tower system using ozone for water treatment was that because ozone is a powerful oxidizer, those metals capable of developing a passive oxide film would be protected from ozone residual. But, further it was observed from the tests that the corrosion rates of 1010 carbon steel, copper, brass, 90/10 cupro-nickel, and 304 stainless steel using ozone and chlorine in physically separate pilot cooling tower systems. In testing periods of 14 and 35 days, they observed corrosion rates were comparable with control tests without treatment. Corrosion rates on mild steel were reported to be lower when using ozone (4.6 mpy) as opposed chlorine alone (28 mpy). Reported test results for an open cooling tower system in which a 0.05 mg/lit ozone residual was maintained. Copper alloy samples had; lower corrosion rates than samples in water without ozone. There was no detectable corrosion on Cr-Ni steel alloys or on titanium, each of which developed a protective oxide layer.

Ozone is not a corrosion inhibitor; however the higher concentrations ratios resulting from the reduced blowdown volumes raise the pH of the circulating water, which helps protect the system form corrosion. It is clear that maintaining a small ozone residual (0.1 gm/lit or less), or of the oxidizing ozone residuals, will maintain algae and Biofilm free surfaces, and thereby avoid or substantially reduce the microbially influenced corrosion (MIC) or under-film corrosive attack. Any corrosion that occurs in a clean system will be uniform throughout the system, as opposed to localized, and the corrosion that does occur will be very unlikely to cause component failures. The heat transfer efficiency, and overall system efficiency, will be restored and maintained at original installation levels with clean heat transfer surfaces after elimination of biological growth in the cooling tower system.
Advantages Of Using Ozone For Cooling Tower Water Treatment
Use Of Ozone Reduces Energy Costs