Home / Ozone Applications / Ozone in Drinking Water
Ozone in Drinking Water
When ozone is applied, as a gas, for drinking water treatment, it is done primarily because of its excellent oxidative strength. This powerful oxidation potential allows ozone to be effective in the reduction or elimination of color, after taste and odor, all of which may be fundamental problems associated with a specific water supply. More importantly, ozone will effectively destroy bacteria and inactivate viruses more rapidly than any other disinfectant chemical.
Ozone is also very effective in oxidizing heavy metals. Iron and manganese can be reduced to very low, safe levels in water supplies through ozone oxidation. When properly applied at the start of a water treatment process, ozone will not lead to the formation of halogenated compounds such as Trihalomethanes (THM's) which are formed when chlorine is added to the raw water. 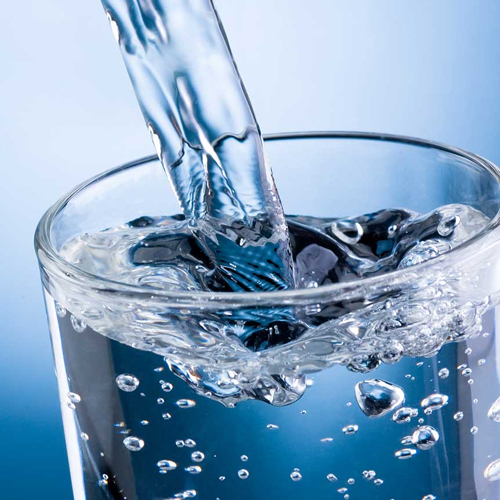 The Main Effects of Ozonisation of Drinking Water

While Iron and Manganese don't pose health problems, but water contaminated by iron and manganese can stain water fixtures and clothing that is washed with this water. Chlorine can also be used for oxidation of iron and manganese, but significantly more chlorine is required versus ozone. This is due to the fact that ozone has an oxidation potential 150 times greater than chlorine. The use of chlorine can also result in the formation of THM's if organic material is present in the water.

Ozone oxidizes Iron from Fe (II) to Fe (III). Fe (III) hydrolyzes to Fe (OH3) which precipitates to a solid form which can be filtered. The oxidation reaction requires 0.43 mg of ozone per mg of Fe (II). Excess ozone can be used without negative effect. Fe oxidizes in the pH range of 6-9. Ozone oxidizes Mn (II) to MnO2 (Mn IV) which is insoluble and can be filtered out of water. The oxidation reaction requires 0.88 mg of ozone per mg of Mn (II). Excess ozone beyond this ratio will form soluble Mn (VII), permanganate. If oxidizable organic material is present in the water and there is sufficient contact time, permanganate will be reduced back to MnO2 (Mn IV). Manganese oxidation is most effective around a pH of 8. In general, when organic materials are present in water, more ozone will be required than the amount shown above since ozone will also oxidize these materials.
The best results are achieved when water has been treated to lower BOD, COD and suspended solids (SS) values so that the ozone reaction is primarily for color removal. Wastewater is Ozonated after it exists from chemical or/and biological pretreatment at a dosage from 50 mg/lit to 150 mg/lit. At these levels, color can be reduced by 90 to 98%. The dosage simultaneously reduces chemical oxygen demand (COD) by about 45%. (Small increases of BOD, 5 to 9%, may occur.)

Color removal efficiency depends on the ozone dosage, the feed's color values, the wastewater type and temperature and water characteristics. Temperature less than 30oC produce the optimum conditions for ozone solubility. Ozone installations for this application represent a significant capital cost, but offer lower operating expense than conventional treatment using chemical coagulants. In addition to the cost of chemical, the coagulant process generates sludge that requires disposal and further expenditure. Generally, the investment for an ozone installation can be paid back in 3 to 5 years, depending upon the size and other specifications.
Odor and taste forming compounds are often very resistant. This causes elimination to be a very intensive process. For the elimination of taste and odor, several processes can be appropriate such as oxidation, aeration, granular active carbon (GAC) filtration or sand filtration. Usually, a combination of these techniques is applied.

Ozone can oxidize compounds in a range of 20-90% (dependent on the type of compound). Ozone is more effective for the oxidation of unsaturated compounds. As was the case for the oxidation of pesticides, ozone combined with hydrogen peroxide (AOP Process) is more effective than ozone alone. Geosmin and 2-methyllisoborneol (MIB) are examples of resistant odorous compounds, which are often present in the water. These are produced by algae and have low odor and taste threshold. Nevertheless, ozone removes these compounds very effectively.Generally, the most effective way to remove taste and odor components appears to be a combination of pre-oxidation and filtration, but ozone with sand filtration and GAC filtration is the most efficient combination (upto 92% removal).
Ozone, like any other oxidant, seldom achieves a complete mineralization of NOM. Organic matter is partly oxidized and becoming more easily biodegradable. This result in a higher amount of BDOC (Biodegradable DOC), As a result ozone improves the removal process of NOM by a subsequent filter, when it is used as a pre-oxidant. In a research, the effect of ozone in combination with a biological filter is described. The combined treatment resulted in a reduction of DOC by 40-60%. The removal is even greater when ozone is used in combination with a coagulant. This is because ozone can enhance the coagulation process. The combination coagulation-ozone-bio filtration results in a DOC reduction by 64%. When only bio filtration was applied, the reduction rate was only 13%. The optimal concentration to remove organic matter by ozone was at an ozone dose of O3/DOC = 1 mg/mg.

Most inorganic matters can be eliminated by ozone quite fast. After Ozonation, bio filtration is also required for inorganic matter. Namely, oxidation forms unsoluble compounds that need to be removed during the next water purification stage.
To reduce the amount of DBP's at a conventional disinfection system (disinfection by chlorine) it is important that potential to form DBP's remains low. This is often expressed as DBP formation potential (DBPFP). The potential to form DBP's can be reduced by the removal of (most of the) NOM, for example by pre-oxidation with ozone (ozone-filtration). This combination can lower the DBPFP by 70-80% when chlorine is used as a final disinfectant. This concerns the DBPFP for THM's, HAA (haloacetic acids) and chloral hydrate.

Ozone is a more effective disinfectant than chlorine, chloramines and even chlorine dioxide. An ozone dose of 0.4 mg for 4 minutes is usually effective for pre-tested water. Several studies proved that ozone, unlike chlorine products, can deactivate resistant micro-organisms.
Several surveys show that ozone can be very effective for the oxidation of several pesticides. It is proved that three barriers (storage-ozonation-granular active carbon filter) are effective and safe enough for the removal of pesticides. From 23 tested pesticides, 90% were degraded sufficiently (80% degradation). For highly resistant pesticides, a higher dosage of ozone is advised, or ozone combined with hydrogen peroxide.
Advantages Of Using Ozone For Drinking Water