Ozone treatment for deodorization of odiferous gases has been acknowledged as a technically effective method for many years. During the past twenty-five years, hundreds of ozone installations for the treatment of sewage plant odors have been erected. Ozone is one of the strongest oxidants known and quickly breaks down odors compounds.

In the elimination of obnoxious odors', Ozone reacts with malodorous substances to produce oxidized products having better olfactory characteristics. Ozone has been found to be very effective on many contaminants including sulfides, mercaptans, amines, phenols, and similar chemical compounds. In addition, ozone is a very powerful germicide and destroys most airborne bacteria. 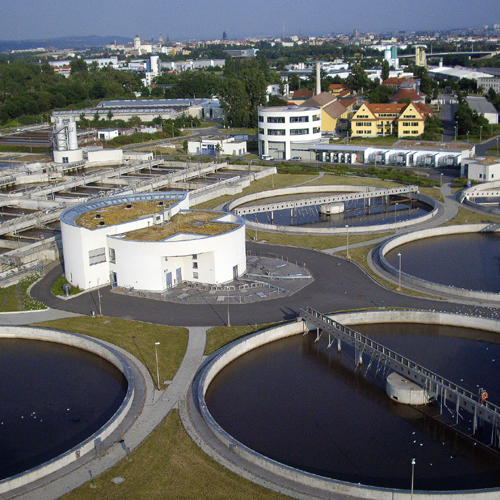 What is required?
What is needed is a way to quickly and economically maintain a reasonably good environment by eliminating the foul smell generated by different biological sources, mustiness from mold and mildew and oxidize organic harmful gases into harmless gases and the products.

For improving the environment either the internal air of the plant should be replaced on a continuous basis to maintain a very low concentration of harmful gases and foul odor. However, this is an uneconomical and inconvenient proposition. Ozone is capable of oxidizing various organic odors, VOC, Organic Gases and destroys viruses and bacteria present in the air that are not only offensive but very harmful.
What is the solution?
Ozone treatment is a proven & a viable solution to purify & de-odorize air in the Sewage Treatment Plants or similar locations that suffers from foul odor and organic harmful gases. Ozone the nature's most powerful purifying agent oxidizes the harmful organic foul odors and the presence of different types of VOC's (Volatile Organic Compounds) and eliminates them through intensive oxidation.
Treatment Process
Ozone is usually generated from "Oxygen as Feed Gas " in ozone systems used for odor control. In our OZ-AIR® ODOFREE Ozone Systems special contact systems are designed as per site requirements so that the odiferous gas is collected and continuously reacted with ozone. To insure proper distribution and increase the reactivity Ozone gas is usually introduced through a perforated pipe or diffuser placed across the duct carrying the odiferous gas. In case we have to deodorize Area our ODOFREE Wall Mounted units are ideal solution in which controlled amount of gas is diffused in the odiferous area.
Ozone Dosage Control
Ozone systems are usually designed for fully automatic operation to minimize personnel requirements. The ozone dosage can be controlled by two different methods.
Typical Ozone Dosages
In the treatment of sewage plant odors, ozone requirements are well established and experimental work is usually not necessary. An ozone dosage in the range of one to two ppm by volume is usually adequate to deodorize exhaust gases from standard, covered, sewage treatment plants. Other applications have varying ozone requirements, since odors usually differ both qualitatively and quantitatively. Table 1 suggests general ozone dosages for various applications. This is based on an air change in the collection chamber once every five minutes and a contact time of thirty seconds.
Note: If precise data is required, testing can be performed on-site. This is usually advisable when specific odor contaminants are not precisely known. All data are believed to be correct. However, this should not be accepted as a guarantee of their accuracy, and confirming tests should be run in each plant since local conditions may vary.
Limit Of Ozone Concentration
Ozone Concentration should not exceed more than 0.1 PPM where persons are present, for eight hours or more per work day, and no person be exposed to a ceiling concentration of Ozone in excess of 0.6 mg/m³ (0.3 PPM by volume) for more than ten minutes. This limit is set as per OSHA standards.

Safety information regarding product is contained in its Material Safety Data Sheet provided along with the system when supplied. When properly applied for odor control resulting residual ozone concentrations will be negligible. They will be below the Maximum Allowable Concentration (MAC) established for most jurisdictions as the maximum level to which an individual may be continuously exposed during an eight hour working day. Ozone destruction is achieved through the oxidation of odor producing compounds prior to release to the atmosphere with a controlled system.
Types Of Ozone Purification & De-Odourisation System
Controlled quantity of Ozone is diffused into the environment:
Monitoring And Control Of Ozone Concentration
Concentration of Ozone in air is monitored by Ozone Monitors manufactured by "OZ-AIR". For Automatic regulation a feedback loop can be used. The monitoring system can be equipped with two steps output, which can be set at a desired Ozone Concentration levels. The System will provide Ozone output correction from the Ozone Generator and if required, warnings or control signals for operation of any other equipment.